A Castle for the King of Techno

A Castle for the King of Techno
At Home with Moby 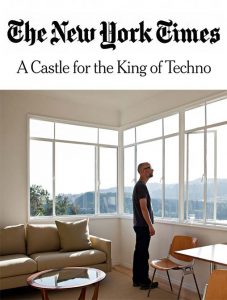 There are a number of things that delight Moby, once the ultimate downtown New York musician, about his castle in the Hollywood Hills: the gatehouse turret, from which the original owner’s pet monkey screamed across the canyons when the house was built in 1920s; the lore, both rock ’n’ roll and literary and decadent, that has the Rolling Stones living here for a spell, Aldous Huxley residing across the street and porno films shot around the pool; and the hidden room — a former tiki bar — that at one time had a fake grass ceiling and pictures of Hawaiian dancing girls, which he cannot show you, because this house is so new to him that he can’t find the key.

There is also what he calls the “penultimate” Hollywood view, for which you have to go up the stairs to the master bedroom. Be careful: Moby’s one rule is no shoes on the rug. O.K., now plop down on the rumpled bed. Looking through the window straight ahead, you can see the canyon fall to the Hollywood Reservoir; to your right and up the hill is the famous Hollywood sign. If he were a Hollywood producer and wanted to impress some actress, Moby says, he’d use that view.

Has he had the opportunity to impress anyone here so far?

“I had a date, which ended up making out under the view of the Hollywood sign, but nothing too crazy,” says Moby, who is so slight as to be almost as much of a caricature as the drawing on his gray T-shirt. Make that a caricature in pencil. I don’t fit in here? No problem. Rub me out. I work alone a lot of the time anyway. In appearance, Moby is either Jules Feiffer’s illegitimate son, or he was drawn by him.

But back to the view from the bed and that date. How’s that relationship going?

“At present, it’s ambiguous. Back in my drinking days, I used to be a little more promiscuous, but now in sobriety, I’m like a nun.” A quick correction: “A monk.”

It is a heck of an impressive view, he is told; it should have had some effect.

“She came from a very wealthy background,” Moby says. (Anyway, what fellow wishes his appeal to be property based?) “Hopefully she was impressed by my wit and character.”

Not so long ago, Moby, a musician and composer Billboard once named “The King of Techno,” was the hippest of downtown guys, running a teahouse/vegetarian cafe on his Lower East Side home turf, where he sometimes stopped in to wait tables, headlining at the Bowery Ballroom and going on about soy milk (well, he still talks about soy milk).

But now, while he keeps a small apartment in Little Italy, he has moved to Los Angeles, to a castle on three acres with a stone wall, a Disney-esque gatehouse and a kidney-shaped pool.

Called Wolf’s Lair after its first owner, L. Milton Wolf, a real estate developer, it is a house with old Hollywood flourishes that Norma Desmond would embrace. On the hill overlooking the castle, mounted on a tall pole, is a lamp shaped like a crescent moon, so there will always be the reflection of a moon in the pool, a perfect example of 1920s Hollywood romance. I’ll buy you the moon, baby.

Moby paid just under $4 million for the house last year and estimates he has put another $2 million into its restoration.

For an alternative-music guy, Moby, 45, has been doing very well. He has sold 5 million albums and 2 million digital tracks, according to Nielsen SoundScan (his music has been used extensively in soundtracks and commercials), and he has a new album, “Destroyed,” out next month. Written while he was touring, “Destroyed” is “broken-down electronic music for empty cities at 2 a.m.,” he says, and indeed the music has an echoing, futuristic loneliness.

Moby decided to move to Los Angeles for a number of reasons: New York is so expensive that many of his interesting, creative friends have had to leave; the winters; and that more difficult thing from which to remove oneself, the winter of the soul. The techno musician turns out to have a more debauched past than his persona suggests.

“I stopped drinking a few years ago, and I got to say that the cold and nastiness of New York in February was a lot easier to handle when I was a crazy drunk,” he says. “If you’re hung over when it’s sleeting outside and 40 degrees, it doesn’t seem so bad.”

Are we talking alcoholism here, A.A. kind of stuff?

“A.A. we’re not allowed to talk about, but yeah,” Moby says.

What made him stop?

“Simply the consequence of being hung over 48 hours after being drunk for six hours,” he says. “It didn’t used to be that way when I was in my 20s. I could stay up till 7 being drunk, and the hangover lasted for two hours. In my 40s, the hangovers lasted for days, and they were debilitating and soul-destroying. I simply had to stop.”

If one were to tell a life story through the houses one has lived in, Moby’s would be particularly rich. A descendant of Herman Melville whose real name is Richard Melville-Hall, he was born in Harlem, when his father was a graduate student at Columbia.

Moby and his mother moved into her prosperous family’s Connecticut home when his father, whom she was divorcing, died driving drunk. His mother, who died of lung cancer 13 years ago, was a sometime secretary and devoted hippie. In 1969, she took him to live in San Francisco.

“My first memory — I don’t want to malign my mother, I can almost see her in heaven slapping her head and saying ‘Couldn’t you say nice things?’ — my first memory is her putting me in this ghetto day care so she could take drugs with her friends,” he says, laughing. “My second memory was her and her friends getting really high and sneaking me into X-rated movies.”

A few years later Moby and his mother moved back to Connecticut, living sometimes with her parents in their “perfect suburban” center hall colonial house in Darien, and at other times on their own, in grungier, darker places.

“We were dirt-poor white trash in arguably the wealthiest white town in the country,” Moby says. “I was on food stamps until I was 18 and became an adult.”

Their homes included a one-bedroom over a garage and a suburban house turned crash pad. “That was basically a mid-’70s drug den,” he says, “where her first boyfriend was a Hell’s Angel and her second boyfriend was a crazy drug addict who played pedal steel in a country-western bar band.”

When his friends’ parents came to pick him up for sleepovers at their homes, Moby would give them the address of a nice house.

He became interested in music in high school, when he started going to clubs in New York. At 19, after forming his own band and working as a D.J. at a club, he moved into his own place, in an abandoned factory in Stamford, Conn.

“It had no running water and no bathroom, but there was free electricity so I could make music, and I was really happy,” he says, adding: “I didn’t have any romantic life. For some reason, I had a hard time finding a girl who was interested in dating a man who lived in a crack neighborhood with no bathroom and no shower.”

In 1986, he moved to Lower Manhattan, where he lived in a series of colorful dumps. There was the tiny two-bedroom on Mott Street owned by a crack addict, and the apartment down the block in a building that had been a Civil War prison.

As the money started rolling in, he started buying extravagant properties. In 2005, he bought four floors of an Upper West Side building for $4.5 million, but got “really lonely” and sold the apartment a few years later, moving back downtown.

In 2003, he bought a 9,000-square-foot house overlooking the Hudson River in Kent Cliffs, about an hour north of Manhattan. “It wasn’t a home,” he says. “It was just, I don’t know, a weird degenerate country house. I built a disco in it. It was a great place for 30 people to have a drunken weekend, but it was not such a great place for one person to be there by himself.”

He was drinking at this point?

“Oh, boy, yeah, that was the whole reason I had the house,” Moby says. “I could go up there for the weekend with friends and just have a whole bunch of lost weekends.”

And all these years we thought he was a clean-living vegetarian with an ascetic life.

The enormous country house was not such a good idea, either.

“It was huge,” Moby says. “It rambled on when I was there by myself. I felt like Orson Welles at the end of ‘Citizen Kane.’

“And this is not a joke, this is not hyperbole — when I renovated the place in Kent, I made the most beautiful bedroom I had ever seen: 1,500 square feet, walls of glass facing north, south, east, 10 beautiful skylights. And I have never had worse insomnia than when I stayed there. So for the last six months that I had that house, I put my mattress in the closet and I slept in the closet. The closet was dark. The problem with the big wall of glass, the sun would come up just as I was trying to go to sleep.”

He sold the house four years ago. Last year, looking at houses in the Hollywood Hills, he glanced across Beachwood Canyon and saw “this crazy shining castle.” The price had dropped 50 percent. He went to see it and, as he says, fell in love.

The castle needed major work. The roof leaked. The living room walls had been painted a dark gray, the floors had been painted black, the wall above the Gothic fireplace was covered in shells and there was what Moby calls “a low-rent country kitchen from 1979 with strange terra cotta tiles that were ugly to begin with.” He wanted a restoration, not a renovation.

The guest house remodeled by the Frank Lloyd Wright protégé John Lautner in 1961 was exempt from this edict. Moby hired the Los Angeles architecture and design firm of Tim Barber to redo the roof, the kitchen, the plumbing and the wiring, and to replace all the windows and add three bathrooms to the main house. He also plans to turn the tiki barroom into an invitation-only magic theater.

The talk turns to his new album, which he wrote while touring, and to the book of photos accompanying it. They’re lonely images: deserted cities in the middle of the night, empty tunnels, an office building at 4 a.m. when the cleaning crew has turned on the fluorescent lights.

It’s odd that someone who finds beauty in these stark, dehumanized places has chosen to live in what seems like the opposite, a fairy tale castle, Moby is told.

“It’s also, in large part, the opposite of the houses I lived in growing up, which were very small and dark,” he says. “Basically, a Freudian in their first three days of school would be able to figure out the psychological impetus, which is creating or moving into the idea that I dreamed of when I was a poor kid.”

All he needs now, to go with the castle, is a lady.

“I concur,” Moby says. “Well, I disagree. That is not all I need. I need dogs. A house filled with dogs and a smart, funny, kind, loving girlfriend or wife. It’s terrifying, but actually it seems like a really nice idea.”