In early 2015, Senior Project Manager Ari Engelman began his first Tim Barber Ltd. project: an approximately 30,000 square-foot, ground-up home in Beverly Hills that Principal Tim Barber proclaimed, “Is unlike anything we’ve every done.” And that’s saying a lot for a 23-year-old firm with a varied body of work.

Tim claims the key to this project’s success is Ari, a New York expat whose commercial and scholastic experience were an unexpected boon for this monumental, Southern California residence.

“I’m really proud of the work Ari did to bring this project from a start-over point all the way through plan check.  He included great new features, and he did it in a way that no one else could,” Tim praised.

That “start-over point” was the owner-led decision to scrap an earlier and costlier plan to renovate an existing property, and instead, design a brand-new home from the ground up.  Ari joined our team after the choice was made, but quickly became its champion, pulling from his commercial expertise to skillfully innovate the home’s design.  One particularly interesting improvement was the introduction of steel framing.

By the time Ari acquired the project, it had already been designed with wooden framing, which — while extremely conventional in residential architecture — is not necessarily sustainable in California.

“I didn’t realize until moving here that termites are everywhere. Everybody living in the LA area has termites,” Ari said, and Tim confirmed that the cost of fixing extensive termite damage plays a significant factor in renovation some California homes.  Recognizing that termites would eventually pose a threat to a new wood-framed home, Ari swapped out timber for the light gauge metal framing frequently used in his commercial work.

“Metal is, by definition, termite-resistant,” Ari explained. “Another advantage is that it’s a non-combustible material, so the general consensus is that it’s safer.  It also won’t rot like wood, so it’ll last longer.”

More subjectively, “There’s something to be said about being the first steel-framed house on the block,” Tim added.

The change was not, however, a simple substitution.  “The way that wood and metal framing are put together is really different.  It’s not one-to-one,” Ari noted. 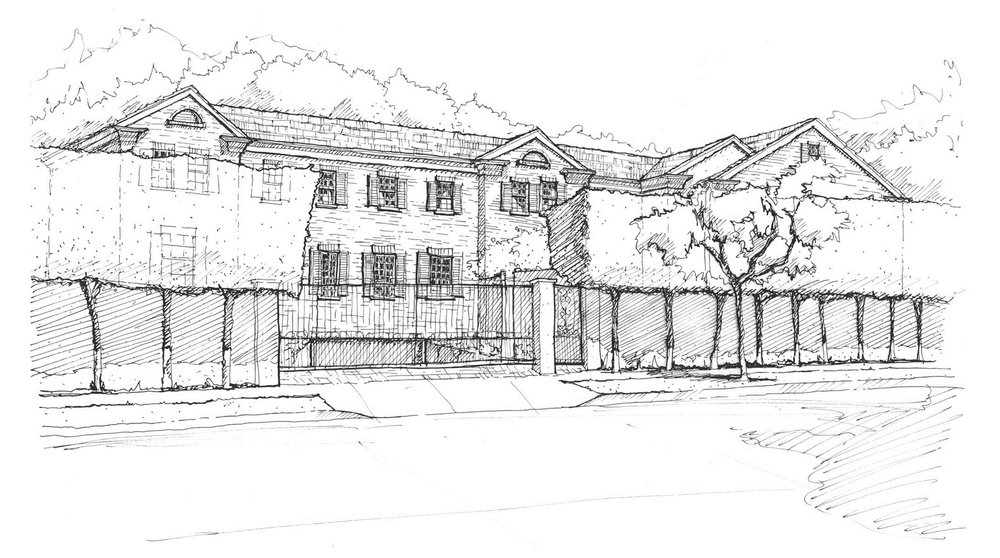 Sketch of a new home in Beverly Hills: A preliminary sketch of the side facade from the street by Tim Barber Architects. 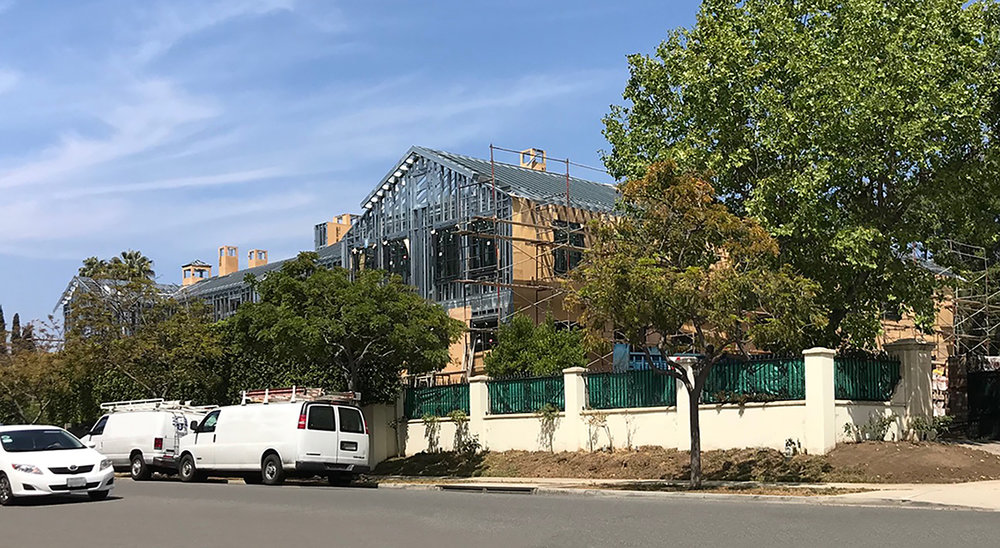 Construction of a new home in Beverly Hills: The Beverly Hills job site in late June 2018, showing the progress of the steel framing.

To further complicate matters, the City of Beverly Hills required that the new home match the renovation that had already been approved, which meant that Ari had to make significant structural changes without impacting the overall design, and while still meeting Title 24 (California’s energy efficiency standards).  As Ari knew, one major disadvantage of using steel is that it’s inherently thermally conductive, but he proactively mitigated any potential issues by building brick cavity walls with rigid insulation — a commercial architecture technique that he describes as being similar to, “Putting on a blanket before any temperature touches the framing to stop thermal transfer.”  There were other ways to do it, but Ari’s method was the most efficient in pushing the project over Title 24 requirements.

Another feat of invisible ingenuity and energy efficiency is the home’s roof well and HVAC units, devised by our team and Mechanical Engineer Mehrdad Rokni PE.  Visible only from an aerial vantage point, this massive trench in the roof’s center is designed to house ten, five-ton variable refrigerant flow (VRF) condensers.  Why is this such a big deal?

In homes with run-of-the-mill HVAC systems, a few units serve an entire home and don’t adjust accordingly to the environmental factors that might cause variance between rooms.  Contrary-wise, VRF technology uses one condenser to serve multiple, environmentally sensitive smaller units to ensure precise and consistent temperature control throughout this expansive house.  Even better, Ari shares that VRF condensers’ Seasonal Energy Efficiency Ratings (SEER) “Are through the roof,” which translates to significantly lower energy bills.

Ari’s research and resourcefulness make it abundantly clear that he hasn’t cut a single corner, not even on a single brick.

“Everything with Ari was a whole brick — not a sliver, not a piece.  that’s something he totally brought to the table, and that’s the kind of integrity we always want in our work,” Tim remarked on Ari’s meticulous brick arrangement.

“The brick is really cool, and I was really excited about it, because it was a chance to do traditional, East Coast, full-brick masonry, which people rarely do here.  It creates a really strong, long-lasting wall that’s been tested, improved upon, and proven for at least a hundred years,” says Ari.

Ari also led the charge in an even older technology: the home’s combination recreational pool and mikveh (a bath for Jewish purification rituals).  Located in the gym on the upper level of the home’s two-story basement, the mikveh-pool was no small feat.

“The mikveh requirements are thousands of years old and are very specific.  Those technological requirements can be at odds with those of modern-day pools, so a Rabbi advised on its development to ensure that this combination feature could be constructed to comply,” Ari recalled.

The team brought in several other specialists and vendors to consult on the various other unique features of the massive basement, including a two-story garage with a car lift; a glass elevator and surrounding square stair; a bowling alley; a movie theater; and a large sports court with a sprawling green roof.

“As residential architects, we’re generalists, and it’s really exciting when we get to meet new challenges.  We’re not going to be the world’s expert on movie theaters or bowling alleys, but our objective is to find and work with the right vendors and consultants to understand what these spaces need, what they look like, and how they function, and refine according to that,” Ari explains.

“We’ve done a magnificent, traditional, well-built house, with state-of-the-art technology.  Be it the steel framing, efficient HVAC, brick returns at the windows, or the boat-like foundation, the part that makes me proudest is that from macro to micro, Ari tackled it.”