Honoring Design Icons: The Story of Our 2019 LCDQ Legends Window 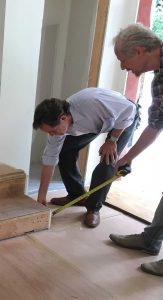 Each year for the past ten years, designers from across the globe have converged on Los Angeles’s renowned La Cienega Design Quarter (LCDQ) to partake in its annual LEGENDS event. This year the LCDQ celebrated bygone design legends and added a new luminary to this illustrious list: Renaissance Design Studio’s co-founder and our longtime collaborator, Al Wiener.

“I met Al about fifteen years ago at a home tour and was enchanted by his authenticity, generosity, and passion for excellence,” principal architect Tim Barber reminisces.

By that time, Al was already one of the nation’s foremost craftsmen, fabricating and installing beautiful staircases and millwork in the country’s most important homes. His love for his craft showed in every project, and he approached intricate designs with zeal.

“We were fortunate to collaborate with Al on all sorts of complicated interior architecture,” Tim explains. “Whenever we grappled with a design puzzle, he found a solution. Al always said, ‘We can do this,’ and then we would.”

“Renaissance has one of the Boulevard’s largest storefronts, which the LCDQ invited us to design for their fourth Legends event,” (former) interior architecture designer Patrick Tennant remembers.

The invitation came with a unique challenge: the showroom was so new that it did not yet have a display. Tim, Patrick, and Al would have to design, construct, and fully stage the window in only four weeks. It was also Patrick’s first project with the LCDQ and Tim, and the stakes were high.

“Tim hired me as a contractor to design and execute the window display. If all went well, he would hire me as his full-time interior architecture designer,” Patrick recalls. “We were days away from the LCDQ deadline and still had a lot of work to do. I anxiously told Al, ‘I think we need to go faster. We aren’t building a house that needs to stand for 100 years; we’re designing a set.’ Al said, ‘We need to give the window as much attention and thoughtfulness as a real house. That’s the only way I know how to do it.’ That left an impression on me and influenced how I design.”

Six years later, the display still stands, Patrick is celebrating his sixth work anniversary with Tim Barber Architects., but Al Wiener is gone. He passed away from cancer in April 2018, weeks before LCDQ Legends 2018.

“Even in failing health, Al urged Kim and Gary to participate in Legends, but they understandably decided to focus on Al,” Tim says.

When Kim asked us to design her window for 2019, it was a bittersweet reunion.

“It was a privilege to create our first LCDQ window display with Al and our honor to design Renaissance’s first window without him,” Tim remarks.

“It’s like coming home,” adds Patrick. “I never imagined that I would get to reinvent our first window design. It’s a testament to all of us — Tim, Al, and myself — that it’s still there and the design is still so fresh after all this time.”

But how does one adequately honor such a tremendous legacy?

“LDCQ’s Legends 2019 theme is Icons of Design. We are paying homage to a designer who matched Al’s enthusiasm for interior architecture and superb craftsmanship,” Tim explains. “We also wanted to showcase Al’s original handiwork, so we knew that we had to repurpose the millwork of the existing display.”

Our team unanimously agreed on San Franciscan architect, interior designer, and inventor Timothy Pflueger (1892-1946), who is best known for his intricate and innovative Art Deco interior architecture from the late 1920s and early 1930s. This idea aligned with our memories of Al and the 1930s-inspired millwork in the display we created with him.

The display, like some of Pflueger’s interiors, was also the scene of many fêtes over the years.

“Al and Kim threw great parties,” remembers Tim. “Al celebrated life with abandon and he taught others to do the same. It seemed fitting that our window would depict a wild party.”

Behind the Scenes: Making the Wild Party Window 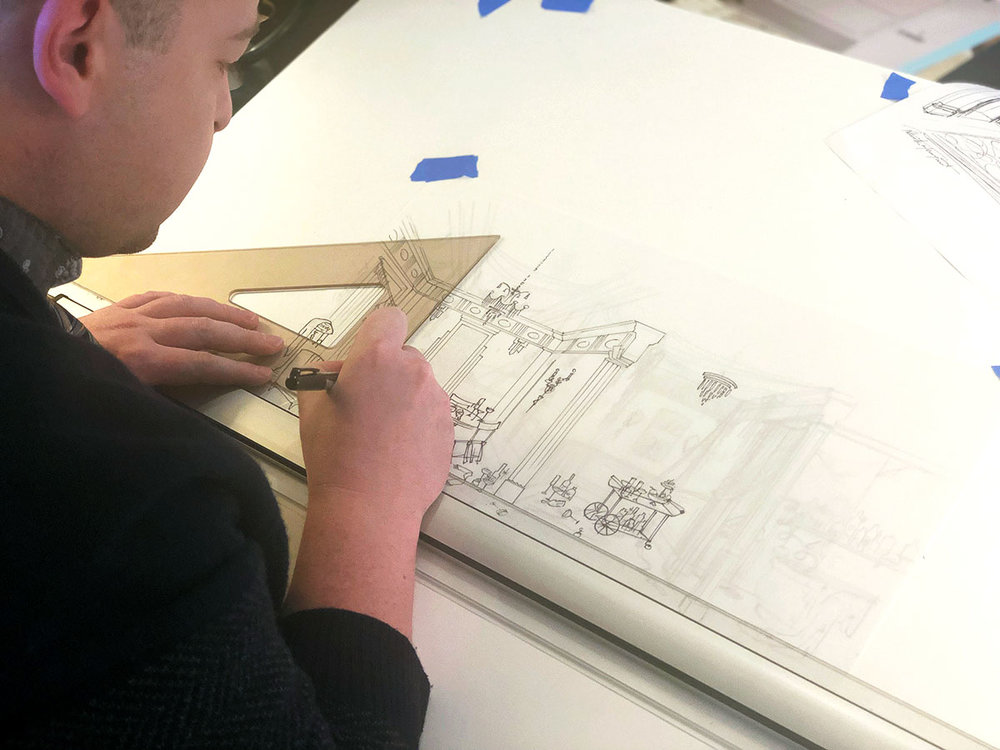 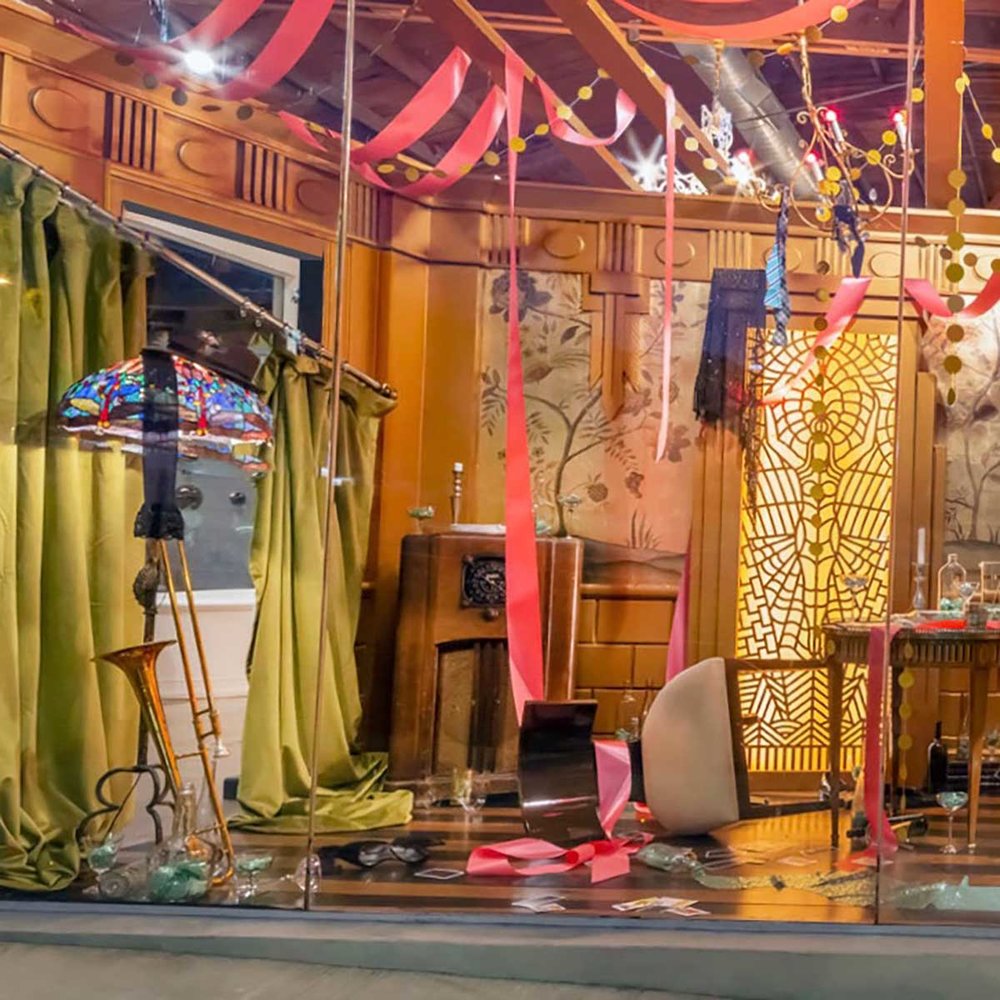 The design is divided into three spaces, the first a gilded parlor ravaged by a wild party. Image from a panorama by Grey Crawford, 2019. 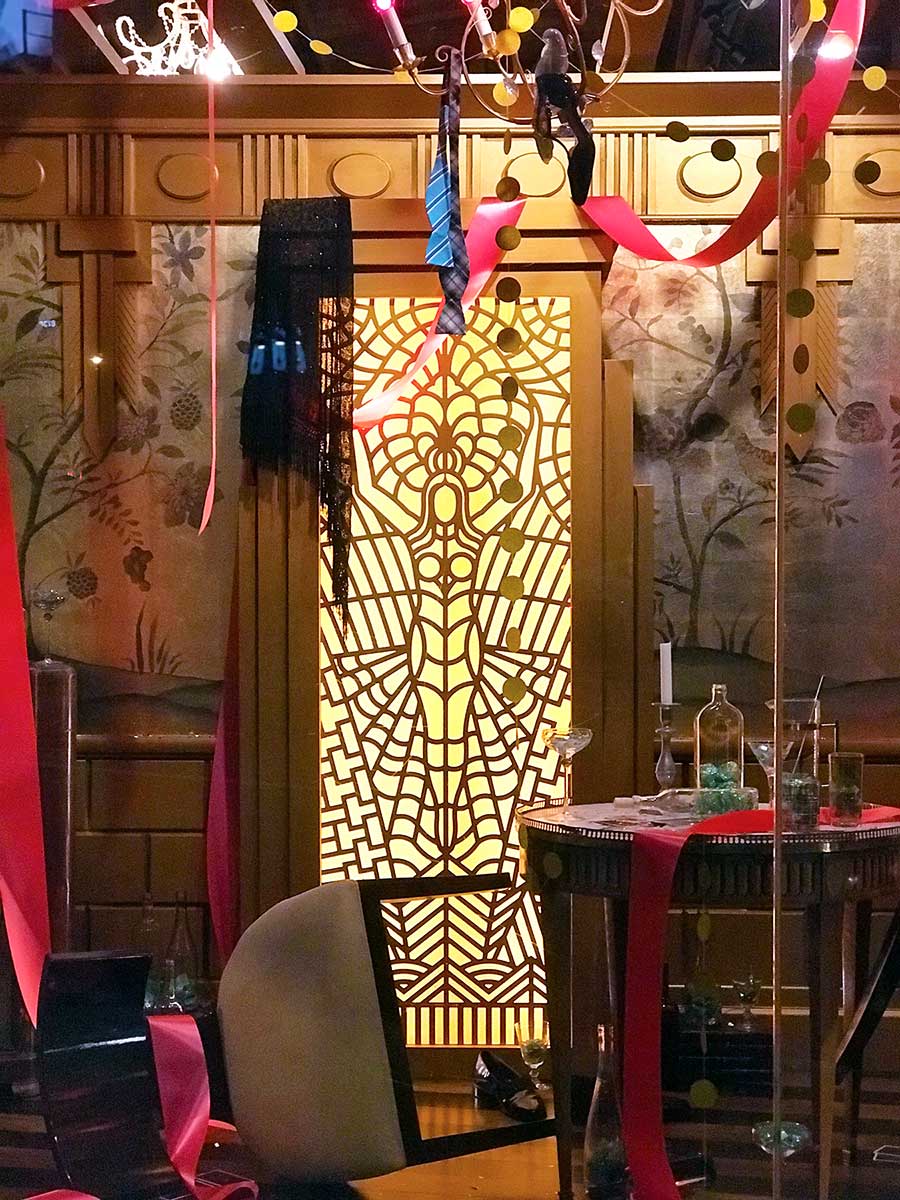 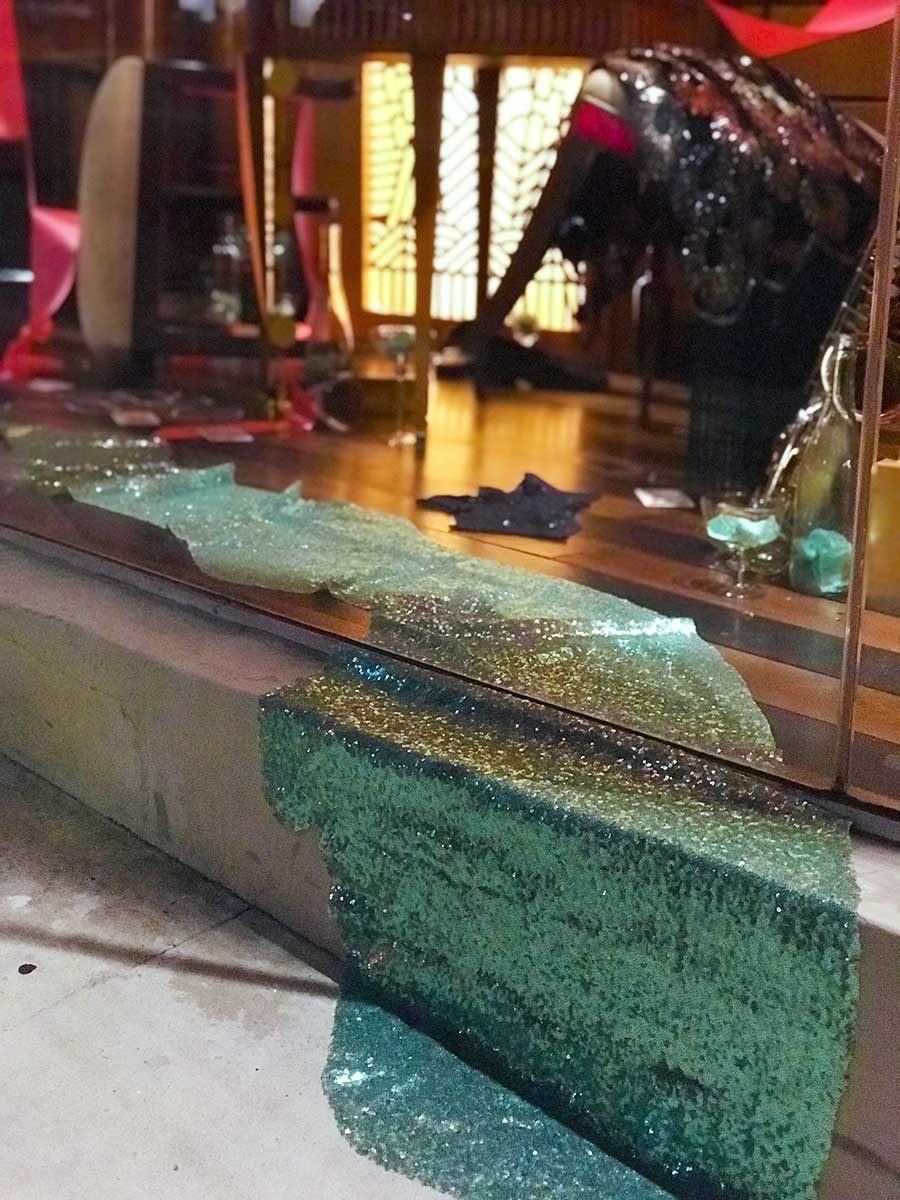 The design breaks the “fourth wall” with sequin “gin” spilling onto the sidewalk outside the showroom. 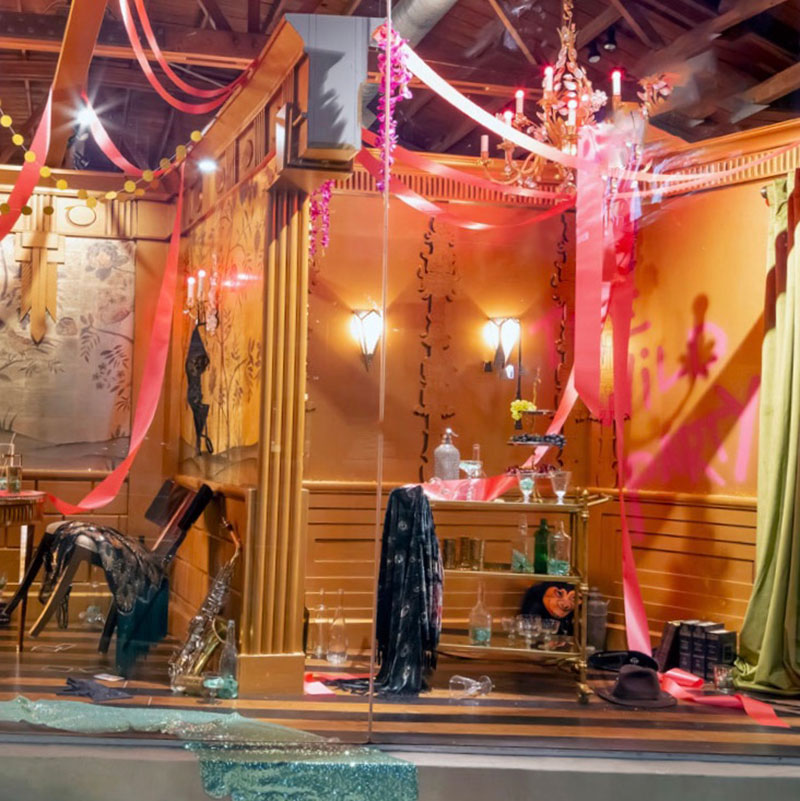 The second room features a bar cart, and Mayan Revival millwork originally designed by Timothy Pflueger for 450 Sutter Street in San Francisco. Image from a panorama by Grey Crawford, 2019. 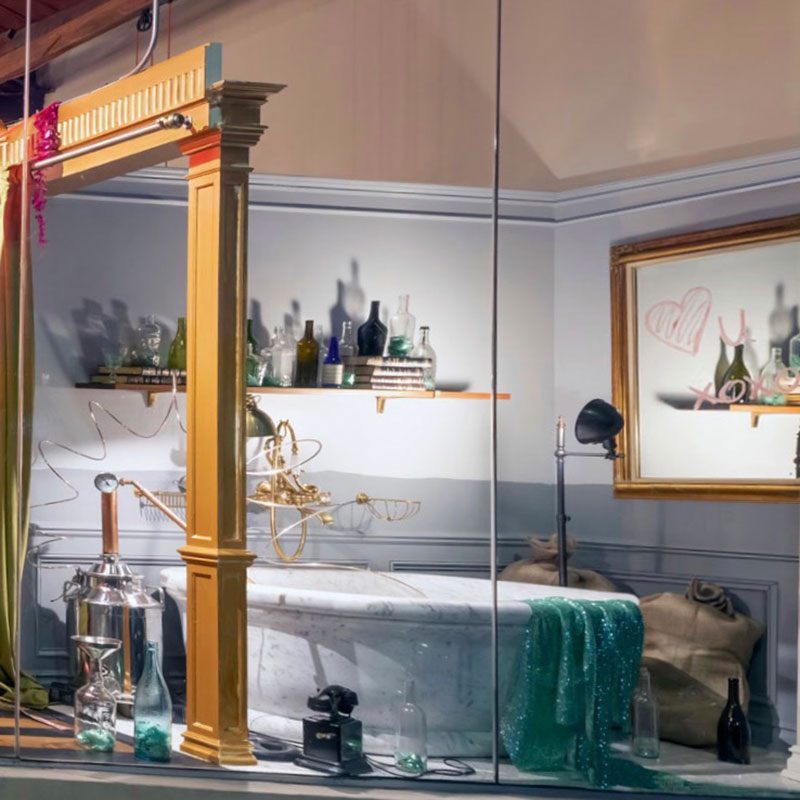 We repurposed a marble bathtub from our 2013 display as a backroom gin distillery. Image from a panorama by Grey Crawford, 2019.

Although the window features our hallmark, timeless interior architecture, it is otherwise unlike anything we or Renaissance Design Studio have ever done before.

The original millwork and walls are gilded, some covered in a new and exotic Phillip Jeffries wallpaper. Another frequent collaborator, Tony Murphy, installed a whimsical walnut and glossy black striped wooden floor. Kreiss Furniture’s Eros side chairs and John Nelson Antiques’s directoire marble top gueridon are toppled and sprinkled with confetti, clothes, and overturned bottles of sequin “booze”. An avian Baguès sconce provided by Renaissance Design Studio and a pair of silver diamond sconces by Remains Lighting illuminate the glittering display. A Baguès chandelier (also from Renaissance) bears a patent pump from a guest who kicked up her heels quite literally. Hidden at the right is a marble bathtub, another vestige of the original display repurposed as a makeshift gin distillery.

One of the most striking features, however, is a new Tim Barber Architects. and Renaissance Design Studio custom collaboration.

“Renaissance Design Studio fabricated this backlit light box using technology similar to Timothy Pflueger’s Art Deco designs,” Patrick explains. We reproduced the decorative grille from the ceiling of the Paramount Theatre in Oakland, which Pflueger designed inside and out.

“People recognize us as designers of classical, traditional homes, but we strive to push the envelope,” Patrick says.

“Our collaborators and friends are surprised by this design, to put it mildly. We’re very proud of it and like to believe that Al would be, too.”